So after promising to add updates about Breath of the Wild on a much more consistent basis, I totally checked out for three months. I last posted here on October 19 and I wish I could update you on all the games I have been playing. That would be extremely difficult though as it seems that as soon as I stopped writing my game playing went up and up and up. In October and November I continued to smash Zelda and Mario Kart 8 on an alternating basis. By the beginning of December my Zelda playing had slowed way down. Before that I had spent a bunch of time grinding through the Master Sword Trials just going back in again and again. I beat the first two levels and leveled my Master Sword up to 50, but just didn’t have the desire to go back in and try to beat the third level. The second DLC came out in the middle of December, and I was right back there. The Champions Ballad had me right back in playing that game at any free moment. It opened up three new shrines for each of the four champions, and then a replay of the Divine Beast bosses with limited weapons, armor, and health. These boss fights were not as engaging the second time around because the limited weapons means you have very few attacks options and (at least for me) you’re just on the run against the bosses because even with 15+ hearts you are almost dead after one direct hit and then just trying to survive. These were down moments in the DLC, but the real joy was just being sent back out into the world. The final boss fight of the DLC is against a Sheikah priest from one of the shrines who tests link to make sure he is worthy of being a champion. It is a wonderful challenge with the priest replicating himself and attacking from a crowd of identical persons, and then right before the end he grows huge and you have to dodge his stomping feet. It was a great end to another journey in Hyrule, but after it ended, even though I still haven’t beat Gannon, I just stopped playing it. I started going hard at Mario Kart and then for Christmas I received Cave Story+. This is a wonderful 2-D dungeon crawler with a unique weapon leveling system that is very demanding and adds an extra layer to each boss fight. I was stuck into that for 10 days or so and then I took the plunge and bought a PS4.

I owned an Xbox 360 throughout high school and have really good memories of playing Fifa with my friends, but I sold it before I went to college. I didn’t own a TV and didn’t want to buy one and so I just gave the thing up all together. It wasn’t that hard either, I don’t remember missing video games, and to be honest I probably filled that time with more TV/movie watching. Then at the end of 2016 a couple things kinda happened that brought gaming back into mind and got me wishing that it was a thing I still did. I started listening to a podcast called Filthy Casuals which is a delightful show by three Australian comedians who really appreciate the joy of gaming. I was also living back near my parents and little sister who had expressed a very tepid interest in gaming, and for Christmas I bought her a used 360 and a couple of games. She tried it and it didn’t really take (I probably bought the wrong games). So after a couple months, I was left with a 360 that I would turn on maybe a couple times a month to play for an hour or two. But that was enough to get me back in. I cared about this thing again and once the desire is back then you want to get a current generation console. I wanted to go day one with the Switch, but held out on that until August when I got a Switch and Zelda and played as much and as often as I could. But even at that point the idea of ending the year with a PS4 was ridiculous, Zelda had everything you could want (except this). I Don’t know where I first heard of Horizon: Zero Dawn (I think it was this Verge Post), but I remember being absolutely captivated by the whole thing. I couldn’t forget that game, and so towards the end of the year as my Zelda infatuation wore off, the idea of buying a cheap PS4 rolled back around. I wasn’t in the states on black friday so I couldn’t get a cheap one then, but for Christmas they put out a Star Wars bundle (another game I was excited to play). Before you know it, it’s new years eve eve and my sister and I are going to get a PS4 at eight-o-clock at night.

That name works out nice where the first letters of each word can be related to gaming consoles (although the N64 one is stretch). It’s good there isn’t an X, and I can justify not squeezing a third logo in there, because I’m not playing Xbox One. But I also refer to it broadly as a games journal because it will not be limited to video game. I’ve been playing board games a bit recently and have recently begun learning how to play Magic, so I want there to be space here for non-digital games to be discussed as well. That is probably enough for right now, but just a little update on what I’ve been playing. It’s almost all PS4 recently which means Star Wars and Horizon Zero Dawn (mostly Horizon though). I’m about 45 hours in and absolutely captivated by the world, the story, the main character (Aloy). There’s a lot to talk about, and I will get to it in depth with later posts, but the combat, the movement, and the quests are just so much fun. The bow and arrow mechanics are extremely satisfying to use and create a lot of complexity in the machine combat. I know I have written in previous posts about playing Zelda and just having a huge smile on my face because I’m just enjoying the experience so much (specifically some of the Divine Beasts and the Yiga clan hideout), but I think I might possibly by enjoying Horizon a little more. That enjoyment doesn’t diminish the Zelda in any way, but I am worried about how I it will go when I try to go back into Zelda in a big way. But right now Horizon is amazing and discussion of it and Star Wars: Battlefront II will be the subject of upcoming Play Nice columns. 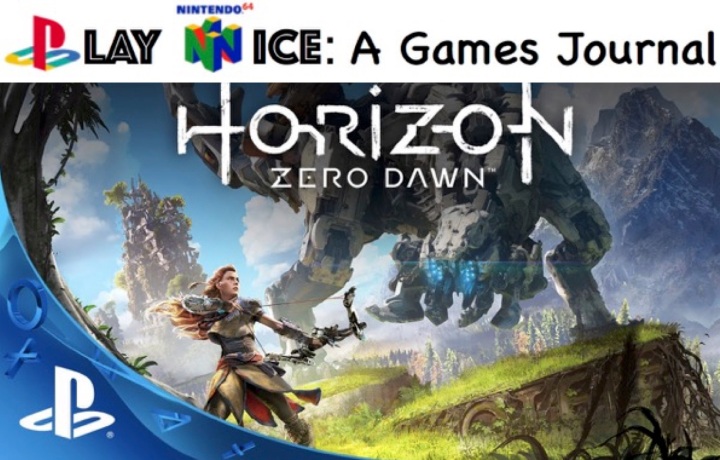